But have you ever spared a thought as to what it is that is so funny about funny things?

Here the Bears do just that! 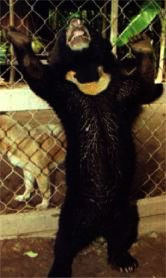 Humour is motivated to discover human nature by observing for the sympathetic audience.

Wit is throwing light into words and ideas by surprising the intelligent ones.

Satire is motivated to ammend a situation in the province of morals and manners by accentuating for the self satisfied people out there.

Invective will discredit your misconduct by directly stating to the public audience.

Irony will exclude you by stating "facts of mystery" to an inner circle.

Cynicism can justify one's morals by exposing nakedness to the respectable audience.

Sardonicus offers relief in the face of adversity through pessimism but only for oneself.

Now, think about what you just read. That is the formula from the onset. No matter what language you use. Jupiter rules expansion and laughter. This is what distinguishes us from the other animals. To laugh at a being in trouble or suffering is called "schadenfreude", which does not translate very well from the German. This also is configurated in a medicine wheel.

Puns, parody and Spoonerisms etc, all come from this framework. So, where does fun come into exploitation?

Is Fun =Seeing Bears fight over food, after being starved in order to do so?

Is Fun =Watching tethered cubs torn to the ground by 2 or 3 dogs in organized bouts?

Is Fun =Watching a captive dancing Bear, in ignorance of it's dastardly training regime?

Is Fun =Seeing a Bear burned alive to satisfy ones culinary lust?

Is Fun =Spending up big money for prowess on an endangered entree?

It could be invective humour that is so funny and present here, but the Bear's conduct is a result of its environment, which it has been placed in against it's will. The farmer who laughs, when condemning a sick old Bear, drained of all it's bile, to slaughter, is attempting invective humour.... The Bears are not laughing.

It certainly is ironic because it excludes the bear from [2002!] humane treatment.

This does NOT sound like fun to us. We will have more on fun later.