Dancing Bears have been abused for a long time. They have always danced, but not always on a leash. This trend has been around for centuries and often happens like this.

The Sloth or Asiatic black cub's mother is smoked out of its den and killed or captured. Usually mothers do not let you take their cubs from them willingly. The cub is then, upon return isolated from its siblings, if any have survived and tied up by the neck, next to an upright stick, so that it can not sit or lie, only stand.
This goes on for weeks to make the cub accustomed to this standing position. Soon after that comes the piercing of it's nose with a red-hot poker using no anaesthetic. 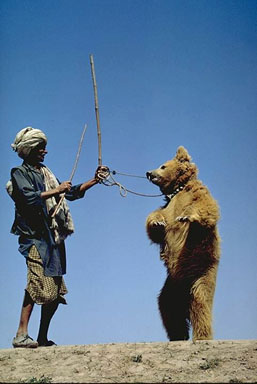 A Metal ring is inserted to command this poor beast. If the owner has no rings, a rope may be inserted instead. Many cubs have died by this stage, but the ones who haven't are then danced on a hotplate with a special piece of music, or a drum. Their hind legs are then hit with sticks so that it "learns" to dance when that music or instrument is played. Every time, it remembers the torture and "dances" to avoid any more pain.... This animal is chained and exploited until its service time runs out from 3 to 5 maybe 8 years max. Fortunately, for the bears it is a banned practice now.
India may be the last place where it has been made illegal, after Greece, Romania, Turkey and other countries ceased after pressure from Welfare Agencies the 1990's.
The main problems associated with de-commissioning is that the bears are often neglected, starved and/or eaten because it wins no more money. [about US$100 per month] and that the Bear handler is out of a job.
Hopefully the practice will be left to the history books.... 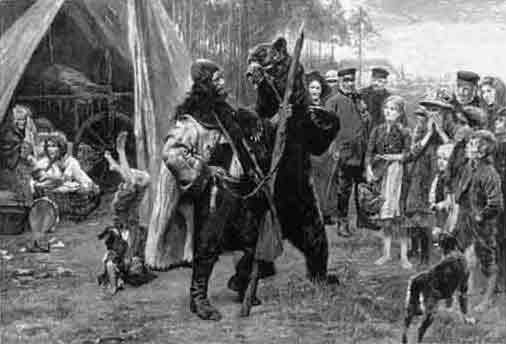