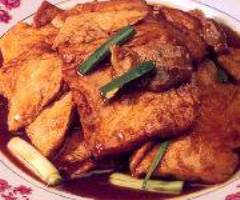 Several Japanese companies are now marketing synthetic UDCA, which is derived from cow bile, domestically and in the United States, Taiwan and slowly gaining favor in South Korea.. South Korea alone reportedly already consume 40 tons of synthetic UDCA per year as a liver tonic and to prevent hangovers.

The medicinal benefits of Bear gall are not denied in the west: Actigall, a synthetic form of(UDCA)--the active ingredient in Bear gall--is used to dissolve kidney stones and treat cirrhosis of the liver.

If embraced by Traditional Medicine practitioners and consumers, synthetic UDCA and the many readily available natural substitutes could substantially curb demand for Bear gall bladder.

Although many traditional pharmacists rebuff the West's cries for increased use of substitutes for endangered species, one organization, the Hong Kong based Association of Chinese Medicine and Philosophy, with members in Taiwan, Macao, Hong Kong, and China, has taken on the Herculean task of promoting herbal medicines andcombating the misconception that only animal ingredients are the best supplements and medicine for human consumption.

Substitutes should be vigorously promoted; the array of available natural substances can effectively treat the wide range of illnesses for which Bear gall bladder is presently used. It is unrealistic, however, to expect that a significant number of consumers and dispensers in the major consumer nations who now subscribe to the legitimate medicinal uses, as well as dubious remedies and non-medical uses of Bear gall bladder will easily abandon their present beliefs and habits of consumption.

This reluctance is due mainly to two factors. First, substances found in animals are quite similar to those found in our own bodies. A given animal compound or drug is said to be much more potent than that of a corresponding plant. For this reason, rhinoceros, tiger, and Bear parts are viewed as being far superior to Madagascar periwinkle herb or rhubarb (both substitutes for bear gall bladder).

Second, the rarity of any species of fauna for which demand is high, especially in Asia and more especially when the species has or is perceived to have medicinal or aphrodisiac qualities, sets in motion a perverse speculative mentality. Importers and wholesalerspurchase as much of the item as possible and, in some cases, consumers purchase the species because of its rarity and high price. The high price being an added assurance that the gall bladder, horn, or bone is the best possible drug available. In some cases, endconsumers also purchase endangered species medicines as a show of affluence.

A third reason that substitutes have not been and probably will not be more readily adopted, at least in the near future, is that governments in consumer nations have done virtually nothing to promote the use of alternatives to endangered species. In Taiwan,rather than address the issue at all, the government has provided loopholes to allow trade in all bears; the subject of substitutes has not even been approached.