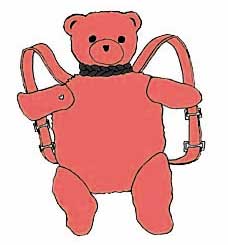 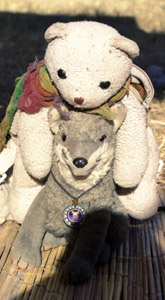 CHARACTERISTICS:
Martie Bear was born pink in early 1996 and has slowly lost pink lustre to a greyer shade. of...well pink. He is a back pack Bear and has a replacement zipper from the back of his neck to his left rear torso. His fur is slowly settling into a short, dreadlocked style. He currently sports around his neck, a rainbow scarf that came from the Tokenwall Confest in 1989.He previously wore a plaited leather band, but this was stolen as he sat alone in Berlin one eve. MB has also in his back, a few members of his extended family that journey with him and keep him company. This is not unusual for him. He has round plastic beaded eyes and a brown muzzly bit. His design makes him very portable. His straps have been worn out a little from trips to well, everywhere! His right paw has probably sincerely shaken more hands than President Bush and also collected many small coins for his bear hospital fees when his cup was held on it.

MB has a distinguishing feature on his right arm, which is a heart shape lock. This formed when he was a year or two old. To this day it is still there.

SIZE:
His size is 413 mm in height, from his paws to his head stretched out and 345 mm in width. The tummy area is 10mm to 250mm in thickness- depending how many family members are inside him.

HABITAT:
Martie Bear enjoys watching animal shows on the television, especially Bear shows and Rolf Harris, Richard Morecroft and Dr Karl K is the bears sciencetalkbackmeister. He can be often found under the blankets to keep warm and so the bed is always cozy. He enjoys going out to any fun adventures that are on in the bush. He hates smoky venues and cigarettes!

DISRIBUTION:
Well, we have only come across one other pink backpack Bear, although many other variations on the back pack Bear have been seen. Bears photo has been taken from Europe to Africa and America, So we guess his image is distributed all over the place!

POPULATION:
He is the only bear of his kind known today, even though there may be another one of his species around the globe.. somewhere! If you have one of his relatives, we would be delighted if you contacted us. We would say that it is difficult to track down any of his kind, but we are sure there would be similar bears to him in the world.

REPRODUCTION:
He has reproduced many pictures, paintings and sculptures that have gone to all sorts of people including Irvine Welsh, Bono Vox , Ali G and Brooke Shields. Do you have one yet? Martie Bear does not reproduce the same way as the other [nine] bears, as he does not have any genitals. His image reproduces well though, and is even tattooed on that BIG bear's leg. Ask to see it if you want a glimpse! Therefore, Martie Bear can be reproduced in any way or form, depending on one's imagination.

COMMUNITY:
The way in which MB looks at life is that all bears are equal. Which is to say, he is for the flourishing of the real community spirit, ie-No more wars, poverty, starvation, genocide, cruelty to animals and megalomaniacal media manipulatiors....

SOCIAL SYSTEM:
He prefers a complete restructuring of the social systems that have his family murdered, kidnapped, tortured and exploited. He therefore acknowledges " BEARISMUS ". The Ten Bear Commandments. He is known well in the community and ventures to participate and enhance any event that you may see him at. MB is a very friendly and accepting bear, who embraces every walk of life that does not contravene the Bearismus commandments. He does meet all types of people and has done all over the world. We are sure in the future, he will be meeting a whole lot of new faces, especially the ones that are to help with creating a peaceful life for all bears across the world.

DIET:
M/B does have a stable diet of Prana.[look it up!] His digestion does not need the food that humans eat. He is nourished by the release of his family in terminal captivity.

DAILY ACTIVITIES:
This Bear has many activities to do each day. There is too many to list, although this site can give you an "in" sight into what some of his time is devoted to. Over many years though there has been a vast variety of goodwill activities, from Orphanage fund raising in Lusaka, Zambia, to meeting lots of new friends at Sydney's Teddy Bears Picnic for the Children's hospital at Westmead. Right now he is heading to Glastonbury Festival in England and over to the Love Parade in Berlin, off to Voov Experience and home to Oz in early October 2003

HIBERNATION:
Martie bear does not need to hibernate, though he is very keen to learn. M/B has a very busy life and so to go to sleep and not be able to help for a few months won't be effective.

PEOPLE AND MARTIE BEAR:
Most people like to meet M/B. Reactions to him are from endowing him with family members and money, all the way through to punching him and/or grabbing him. If you have held him you are very lucky, as that big bear is very protective of him! He has had thousand of photos taken of him by tourists and friends. Many times he has spun around [of his own free will], on the end of his leather leash, which served only to stop him wandering too far. His temperament is amiable and his wisdom comes ...well it just comes! Look in to his dark eyes and you will see it!