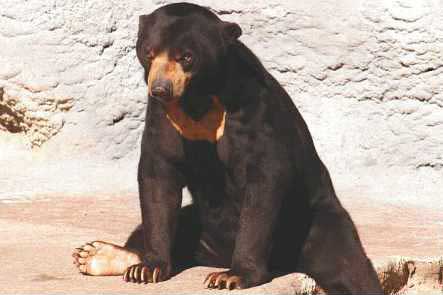 CHARACTERISTICS:
The sun bear has a short, sleek, dense black coat. The muzzle is short, and gray to faint orange in color. The crescent-shaped chest patch is yellowish or white. Their thick coat may be hot in the tropical humidity, but it protects them from dirt, mud, and insects. The muzzle is shorter and lighter colored than that of a black bear and in most cases the white area extends above the eyes. The ears are small and round. The paws are large and the soles are naked, which is thought to be an adaptation for climbing trees. The claws are large, curved, and pointed, which are for climbing. The sun bear, also known as the honey bear, is also the world's smallest and least studied bear. Has a long tongue to extract honey from beehives. Tongue is 8-10 inches in length. They also have a reputation as one of the most ferocious animals in the rainforest. Because they are so rare, very little research has been done on sun bears.

HABITAT:
The sun bear thrives in the hot and humid lowland tropical rainforests where it rains more than 100 inches (254 cm) a year and temperatures stay constant around 78 to 82 degrees Fahrenheit. Sun bears live in lowland tropical rainforests. They are excellent climbers and are thought to sleep in trees, where they spend most of their life they can forage for a huge variety of fruits and nuts year-round.

DISTRIBUTION:
Known habitations include Southeast Asia from northern. Burma and Bangladesh, south and east across Laos, Cambodia, Vietnam, and Thailand, and south to peninsular Malaysia and the islands of Sumatra and Borneo. Found in Iran, Afghanistan, Northern Pakistan, Eastern Himalayas, Tibetan Plateau, which extends to Manchuria and China; also found on the Japanese islands of Honshu and Shikoku as well as Taiwan. The range of this species is not well documented. Because of large-scale habitat destruction and poaching, it is likely that its range has recently been reduced in northern and western regions.

REPRODUCTION:
There is little information about reproductive behavior in the wild but cubs are apparently born throughout the year. The gestation period for six births at the East Berlin Zoo was reported to be 95 to 96 days, suggesting there was no delayed implantation. Conversely, three pregnancies at the zoo in Fort Worth, Texas, lasted 174 to 240 days, suggesting delayed implantation. Litters consisted of either one or two cubs, weighing about 325 grams (10 ounces) each.

They usually give birth to a pair of cubs in a remote part of the forest. The cubs are tiny when they are born and their skin is nearly transparent. They are raised on the ground, under branches, and heavy cover until they are strong enough to climb trees on their own. Cubs are reported to remain with their mothers until they are fully grown. They stay with their mother for at least a year in order to learn how to survive in the rainforest. In the sun bear family, the father actually remains as part of the family group.

SOCIAL SYSTEM:
Nothing is known of the social organization of sun bears in the wild.

DIET:
Sun bears are omnivorous and they will eat anything edible that they can find in the rainforest. They have been reported to eat termites, small mammals, birds, growing tips of palm trees, and the nests of wild bees as well as fruit and honey to snails, eggs and lizards. At times they cause considerable damage to agricultural crops, such as oil palms. They are very good at skimming through the jungle to find any kinds of food they can get their paws on. They particularly love honey and use their long, narrow tongue to collect it.

BEHAVIOUR:
Daily Activity:
Sun bears are very good tree climbers because that is where they find most of their food.
They usually spend most of their day sleeping and sunbathing in nests that they make in trees. After napping through the day, they spend much of their night foraging for food.

HIBERNATION:
Sun bears do not hibernate because they live in such a warm climate and can remain active all year.

PEOPLE AND SUN BEARS:
Because there is so little that scientists really know about sun bears, it is difficult to implement any conservation plans. It is known, however, that habitat loss, logging, hunting for the illegal trade in bear parts, and conflicts with humans are exerting significant impacts throughout the bears' range and threaten its survival. Logging not only immediately destroys the bears' habitat; it also changes the climate and causes the surrounding forests to become drier, which can also increase the frequency of forest fires. Laws have been written to protect the sun bear, but they have not been enforced. Because many people that live near the bears' habitat are poor and starving, they are willing to capture and sell them as pets.