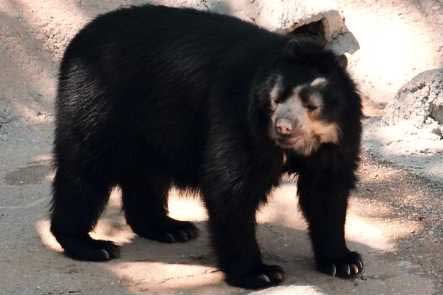 CHARACTERISTICS:
The spectacled bear is small and dark, ranging in color from black to brown, and a few have a reddish tinge. It has distinctive circular or semicircular creamy white markings (spectacles) on the face around the eyes, reminiscent of spectacles. Lines and patches of white usually extend onto the throat and chest as well. The amount and pattern of the white markings can be quite variable. Spectacled bears get their name from the light colored rings around their eyes that make some of the bears look like they are wearing glasses. These shy bears are the only species that live in South America. Little is known about these rare bears because of a lack of research and the remoteness of the areas where they live. Because they live in warm climates, their fur is thinner than that of North American bear species.

Spectacled bears have long claws that allow them to climb trees very well. They also have large, flat molars so they can chew very tough plants that are found in the rainforest such as palms, cacti, and orchid bulbs.

HABITAT:
Spectacled bears are highly adaptable and are found in a wide range of habitats, including rainforest, cloud forest, plateaus, dry forest, steppe lands, inland deserts and coastal scrub desert. Possibly because of loss of habitat and persecution by humans, they appear to be more common in heavy forest. They have been reported at altitudes ranging from about 180 to 4,200 meters (600 to 13,800 feet) but prefer moist forests, warm humid and foggy clouds that are above the rainforest floor at higher elevations. Which is between about 1,800 and 2,700 meters (6,000 and 8,800 feet). No populations have been documented from areas that lack bromeliads and fruits.

DISTRIBUTION:
Spectacled bears are found mainly in or near forested mountains from Venezuela and Columbia south through the coastal foothills of Ecuador, Peru, and into Bolivia. Also spectacled bear is found in the area around or heart of the Andes of South America. Little is known about this species. Rarest of the bear species they are the only bear found in South America.

REPRODUCTION:
Females reach sexual maturity between four and seven years of age. They have a variable mating season. Mating can occur in April, May, and June, and pairs stay together for a week or two, with copulation occurring numerous times. Litters of one, two, or occasionally three cubs (usually two) and are born from November to February. Which is summer in South America. The cubs are born helpless and blind, but by the time they are a month old they are able to travel around the forest with mother, often by riding on her back Females and cubs in captivity vocalize using two and five types of calls respectively.

POPULATION:
There are 18,000 Spectacle Bears and decreasing.

SOCIAL SYSTEM:
Nothing is known of the social organization of spectacled bears in the wild. In captivity, females and their cubs regularly vocalize to communicate, using two and five types of calls respectively.

DIET:
Mostly they eat vegetation, but will eat meat when given the opportunity. Spectacled bears eat a wide variety of foods, including rabbits, mice, birds, berries, grasses, palms and orchid bulbs, but have a strong preference for the leaves, bases, and hearts of plants of the Bromeliaceae family and the fruits of other plant groups. They love fruit and will spend days eating and sleeping in fruit trees. Sometimes they climb cacti to feed on fruit at the top. Tree nests are often constructed as a platform to feed from fruit-laden branches and to sleep in. It is the most varied herbivorous bear species.

BEHAVIOUR:
Daily Activity:
Spectacled bears are generally nocturnal, feeding and traveling at dawn and dusk. They often spend their days in tree nests that are constructed as a platform to sleep in.

HIBERNATION:
There is no evidence that they hibernate. Spectacled bears do not hibernate because they live in a warm climate. Females will build nests for newborn cubs, but otherwise remain active throughout the year.

In 1975 the spectacled bear was listed on Appendix I on the Convention on International Trade in Endangered Species (CITES), which means that the international trade in the species was prohibited from that time forward. Unfortunately, enforcement has been lacking and rarely supported by local personnel. Therefore, the parts trade and human encroachment continually threaten the spectacled bear.