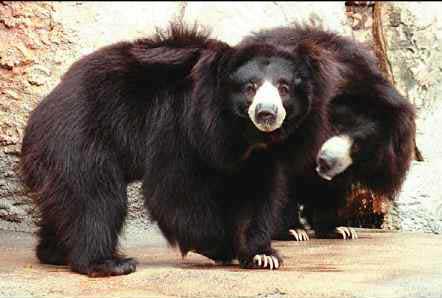 CHARACTERISTICS:
Sloth bears are small and have long, shaggy black fur, especially over the shoulders and neck, which looks like a mane. They have little fur on their bellies and the insides of their legs. Brown and grey hairs may be mixed in with the dark coat, and sometimes cinnamon and reddish. It has a distinctive whitish or yellowish chest patch in the shape of a wide U, or sometimes a Y if the lower part of the white hairs extends down the chest. The snout is light colored and mobile about 2-3 inches long. The nostrils can be closed voluntarily. It is thought that the reduced hair on the muzzle may be an adaptation for coping with the defensive secretions of termites. These bears also have a long muzzle with lips that can be closed. They have a hollowed-out bony palate and no front teeth so they can suck ants and termites out of their nests. People can sometimes actually hear the bear sucking up insects from 300 feet away. They have white curved, blunt claws that are up to 3 inches (7 cm) long. Their tails are approximately 6 inches (15 cm) long. The front claws are used for digging

HABITAT:
Sloth bears are found in forested areas and in grasslands, predominantly at lower elevations. They apparently favor drier forests and have been reported to prefer areas with rocky outcrops. Sloth bears like warm, humid forests near the equator. They can live in a wide variety of forest types from dry thorn forests in the north to wet tropical forests in the south

DISTRIBUTION:
Most sloth bears are found in India and Sri Lanka, South Asia but they have also been reported from Bangladesh, Nepal, and Bhutan.

REPRODUCTION:
Observations suggest they live as solitary individuals except for females with cubs Groups will congregate where food sources are abundant Sloth bears mate year-round; most cubs are born in Nov/December or January. Mating occurs in May, June, and July. In captivity, mating pairs come together for only one or two days during which time there may be considerable vocalizing and fighting. Gestation lasts from six to seven months. Most litters consist of either one or two cubs, but litters of three cubs have been reported. Cubs are born in earth dens or in a nest that the mother builds in a cave or under some rocks and apparently do not leave them until they are two to three months old. They are born blind and helpless. By one month sloth bear cubs are able to travel through the forest with their parents. The cubs stay with their mothers until they are nearly adult, at two to three or more years of age. Or until they reach approximately 50 pounds (22kg) when they begin travel on their own. Cubs sometimes ride on the mother's back by holding onto her shaggy coat.
For a long time sloth bears were confused with another tropical animal called a sloth. These shaggy, docile bears have a unique appearance and some interesting adaptations. Unlike their North American relatives, sloth bears live together in groups where the male is part of the cubs' upbringing.

POPULATION:
Between 10,000 and 25,000 and declining. The current population number is not known and it is listed in CITES Appendix I.

DIET:
Sloth bears eat a wide variety of different plants, animals, and insects but prefer termites. They feed extensively on termites and have special adaptations for doing this. Special physical adaptations allow sloth bears to feed extensively on termites. The naked lips are capable of protruding, and the inner pair of upper incisors are missing, which forms a gap through which termites can be sucked. The sucking noises made by feeding in this manner can be heard from long away. They also eat eggs, fruit, raid beehives, scavenge from tiger kills, other insects, honeycombs, carrion, and various kinds of vegetation. They have been known to eat crops such as sugarcane, corn and yams. In Nepal, they eat fruits extensively when in season, from March to June.

BEHAVIUOR:
Daily Activity:
They are mostly nocturnal, feeding and traveling by night and sleeping in the day. They are excellent tree climbers and are often seen hanging from a tree limb like a sloth. Unlike other bear species, they seem to enjoy the company of other sloth bears.

HIBERNATION:
Sloth bears do not hibernate. During monsoon season they may head for caves or other retreats where they become lethargic and wait out the rains.

PEOPLE AND SLOTH BEARS:
Historically:
Due to increasing human population and encroachment for housing and farming, sloth bears and their habitat are disappearing. Logging and other resource extraction are also having serious impacts. Sloth bears live in a part of the world where people are struggling to make a living, so wildlife conservation is not considered to be a top priority. Fortunately, in India conservation efforts to save the Bengal tiger have also helped to conserve sloth bears and their habitat.