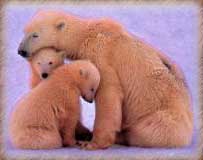 CHARACTERISTICS:
The polar bear is immediately recognizable from the distinctive white color of its fur, which can also be a yellowish white hue. Bears have a large body and the neck of the polar bear is longer than in other species of bears. The head is elongated and a proportionately smaller head but the ears are relatively small. They have powerful, well-developed muscles in their hind legs and neck. Their massive forepaws are webbed for swimming. The soles of their feet are almost completely covered in dense fur to insulate them from cold. The parts of their feet that are not covered with fur are rough like sandpaper to prevent their slipping on ice. Also the soles of their feet have small papillae and vacuols like suction cups to make them less likely to slip. The front paws are large and are used like paddles for swimming while the hind legs trail behind. They have a short tail and small ears. The nose, and the skin underneath the white fur, are black. The soles of the feet have small papillae and vacuoles like suction cups to make them less likely to slip on the ice.

Their outer fur called 'guard hair' is actually clear and hollow (like a tiny glass tube), which allows polar bears to trap the sun's heat and light. The guard-hairs are hard, smooth and shed water. An infrared camera at night will only see its breath! They also have a dense layer of under-fur that traps a layer of air next to the skin. Well insulated, indeed. The fur layers actually keep the skin dry even when the bears swim in icy water. Their skin is black to absorb heat from the sun. Under their skin they also have a thick layer of fat to keep warm.

HABITAT:
The polar bear is found in the polar region in the Northern Hemisphere, around the Arctic Ocean (circle), Northern Atlantic, North Pole, Northern parts of Europe, Asia, North America, and the Bering Sea. The furthest south that polar bears live all year round is James Bay in Canada. The preferred habitat of polar bears is the annual ice adjacent to the shorelines of the continents and archipelagos throughout the circumpolar Arctic. Wind and currents create cracks in the ice that concentrate the seals they hunt. Although polar bears have been recorded as far north as 88", they rarely enter the zone of heavy multiyear ice of the central polar basin because it is unproductive biologically and there is little to eat. In areas such as Hudson Bay, where the ice melts completely for a few months in the late summer and fall, bears spend the summer on land, resting to conserve energy and waiting for freeze-up. Males tend to remain along the coast, while family groups and sub adults go further inland.

Arctic extremes include temperatures that range from -80 to 90 degrees Fahrenheit and light that ranges from almost total darkness in the winter to almost constant daylight in the summer. To deal with these extremes the polar bear must be fairly adaptable. During the winter polar bears move as far south as Newfoundland and into the northern Bering Sea

DISTRIBUTION:
Polar bears are found throughout the circumpolar Arctic. The farthest south that polar bears live all year round is James Bay in Canada, which is about the same latitude as London, England. During winter, when the polar ice pack extends further south, polar bears move as far south as Newfoundland and into the northern Bering Sea. They then move back north as the southern edge of the pack ice recedes throughout the summer.

POPULATION:
There are approximately 35,000 to 40,000 in the world. The largest populations live in Canada, Greenland, Siberia, and Alaska. Smaller populations also live in Norway. Current populations are under threat because of over-hunting, poaching, pollution, global warming, and increasing oil and gas drilling. The number of individuals, of this largest bear species, currently surviving in the world is estimated to be 20,000-30,000. It is listed in Appendix II of CITES

REPRODUCTION:
Female polar bears start reproducing when they are between 3 and 5 years old. Polar bears mate from late March to late May. They usually mate in the late spring and give birth to two cubs in late December or early January. Like other North American species of bears, the embryo does not implant and begin to grow until the female enters the den in the late fall. Polar bears mate from late March to late May. Implantation of the fertilized egg is delayed until late September to early October and the cubs are born between late November and early January. Litter size ranges from 1 to 4; a little fewer than 70 percent of the litters consist of two cubs. Singletons are about 25 to 30 percent and there are a small number of triplet litters.

Females will only have about 8 cubs in their lifetime. When cubs are born they weigh only about two pounds each and are not much bigger than a rat. They are born without the ability to see or hear and have no hair. Fortunately, their mother keeps them warm and nourished until they are able to generate more of their own body heat. Litters of four cubs have been reported, but are extremely rare and it would be unlikely for all the cubs to survive. The most often that females normally breed is once every three years. By April, the cubs usually weigh about 25 pounds (11 kg). Cubs will ride on their mother's backs to cross open water or when weak or cold. They stay with their mothers for about two and a half to three years to learn what they need about survival. The females are very protective of their young due to predatory males and other threats.

COMMUNITY:
Solitary animals except for females accompanied by cubs. Home ranges overlap, bears are not territorial

SOCIAL SYSTEM:
Throughout most of the year, polar bears are distributed as solitary individuals, except for females accompanied by their cubs. They have large overlapping home ranges but do not defend territories. The adult sex ratio is 1:1 but since most females reproduce only once every three years, only a third of them are available in each breeding season. This results in intense competition between males for mates, which is probably one of the reasons why males are twice the size of females.

DIET:
Polar bears are excellent hunters and the most carnivorous of all the bears and live almost entirely on ringed seals, and to a lesser degree, on bearded seals, although they eat a variety of foods. They are also known to prey on young walruses and occasionally even capture narwhals and belugas. During the summer, the bears will eat seaweed (kelp) and range inland in search of alternative foods such as berries and grass and scavenge on the carcasses of terrestrial or marine mammals.

The bears are adept at catching and killing the seals, which can weigh up to 150 pounds (67 kg). They often eat only the skin and the fat and leave the rest of the meat for scavengers. . They do not eat fish. Most fish in the Arctic Ocean are very deep and polar bears are not deep-sea divers. Usually polar bears kill a seal every five or six days. Polar bears can go for weeks without eating because they have huge stomachs.

BEHAVIOUR:
Daily Activity:
Polar bears can range over 20,000 square miles. They generally stay close to shore, but have been sighted up to 100 miles inland. They spend a lot of time in water to catch food or escape danger. They are excellent swimmers and have been recorded more than 100 miles from the nearest shore in the water. They use their enormous webbed front paws as paddles and hind feet as rudders.

HIBERNATON:
Usually only pregnant females hibernate in winter. They use ice dens, similar to igloos, which they construct as temporary shelters. Most polar bears do not den, but enter a sort of 'walking hibernation' where they remain active, but rely on stored fat for energy. Sometimes they dig summer dens in the tundra or along coastal bluffs to escape summer heat and insects.

PEOPLE AND POLAR BEARS:
Historically:
For thousands of years, Inuit people have lived with polar bears and occasionally killed them for food or clothing. The Inuit never over-hunted the animals because it was too dangerous and hunting weapons were primitive. More recently, polar bears have been sought after by trophy hunters around the world and therefore have been over-hunted. By the late 1970's scientists recognized that polar bear populations were too low and the bears were added to the endangered species list. Eventually the International Agreement on the Conservation of Polar Bears and Their Habitat brought the over-hunting under control in 1975.

Currently:
The biggest threat to polar bears is the impact of humans on their habitat. Even though the arctic is generally inhospitable to humans, oil and gas companies are very interested in this region. Oil and gas extraction can be very damaging to arctic ecosystems including the polar bears. There is still a lot to learn about the impacts of human expansion and encroachment, increasing tourism, and global warming on the polar bears.