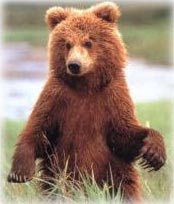 OTHER NAMES:
Grizzly (White) Bear, Brown bears have been called the bear with too many names because of their wide variety of sizes and colors. The Kodiak, Russian brown are all the same species. Brown bears that live in interior Alaska or in the lower 48 states are often referred to as grizzlies or the grizzly-brown bear. Many cultures have alternative names for the bear to show respect for the power of the animal: Finns - "apple of the forest", Lapps- " The old man with a fur coat ", Russians - " honey eater ". Also Alaskan, Asiatic, European, Himalayan and Syrian Bears.

CHARACTERISTICS:
The brown bear (sometimes called a grizzly in North America) is a large animal, usually dark brown in color, though it can vary from a dull brown, almost black to a yellowish white with all variations of brown and red. The long guard hairs over the shoulders and back are often tipped with white from a distance, gives a grizzled appearance. They may have a mixture of colours in their fur, which can also contribute to the grizzled appearance. the coat may change with seasons. Thick coats composed of both guard hairs and under - fur that keeps them warm in winter. In summer they shed a lot of the under coat which creates a shaggy look. The brown bear is characterized by distinctive features such as, a wide, massive head, dished face with a long snout, and a hump on the shoulders. The hump is a thick wad of fat and muscle. They also have round, small ears and distinct cream colored, they also have long claws on the front paws, slightly curved claws that are 2 - 4 inches (5-10 cm) or more in length.

The largest bears are found on the west coast of British Columbia and Alaska, and on offshore islands along coastal Alaska, such as Kodiak and Admiralty. Access to fish protein affects their size. There, males average over 300 kilograms (660 - 1000 pounds) and females over 200 kilograms (440 pounds). Typically 3 - 4 feet (91 - 122 cm) at the shoulder on all fours, and 6 - 7 feet (183 - 213 cm) tall when standing upright. Brown bears from the interior ranges of North America, Europe, and the sub Arctic are roughly two-thirds the size of their Alaskan and Kamchatkan cousins. Brown bears can live in the wild up to 30 years, but typically 25 years is an old bear.

HABITAT:
The male's home range is larger than the female's. Habitats include dense forests, sub alpine mountain areas and tundra, anything that isn't vertical. Once abundant on the central plains of North America, but have since been exterminated. Localized populations are found in Eastern and Western Europe, northern Asia and Japan, Western Canada, and the states of Alaska, Wyoming, Montana, Idaho, and Washington. The Brown Bears have been found in a variety of habitats, but prefer wilderness regions containing river valleys, mountain forests, and open meadows. Home ranges are among the largest of all land mammals: up to 800 - 1000 square miles, but in good habitat some home ranges may be as small as 10 - 24 square miles. The coastal Alaskan brown bears fish for extensive periods at the mouths of salmon streams.

The brown bear is a wide-ranging animal that requires vast tracts of wild, roadless land. Accordingly, this species of bear is considered to be an enduring symbol of true wilderness in North America. Grizzlies can sprint as fast as 35 miles per hour and climb trees. The brown bear in Japan is found only on Hokkaido, and its estimated population is placed at less than 2,247~3,628 (Ministry of Environment 2000). Its habitat ranges from the coastal regions to the mountains, but today the habitats are being fragmented and shrinking in size. It is listed in Appendix II of CITES. One population of the Japanese brown bear (found in the western Ishikari region of Hokkaido) is listed as an endangered regional population, in the Japanese Red List. It has yet to be listed in the IUCN Red List.

Today the grizzly bear in the lower 48 is in low number after being destroyed in 98% of its former range. Roads, ranching, over hunting, and increasing human encroachments, could inevitably eliminate the species.

DISTRIBUTION:
The range of the brown bear is the widest of any species of bear in the world. They are found in localized populations in eastern and Western Europe, across northern Asia and in Japan. In Northwestern and Eastern America as well as, brown bears are found in western Canada, Alaska, and in the states of Wyoming, Montana, Idaho, and Washington. As many as 60,000 grizzlies once occupied the lower 48 states.

Today, fewer than 1200 grizzlies survive in protected parks and wilderness areas within the Rocky Mountains of Wyoming, Washington, Idaho, and Montana. Ursus arctos was listed in 1975 as threatened in the lower 48 states. In western Canada, there are still significant populations of grizzlies, but Alberta, Canada has approximately 750 of the bears, a mere shadow of the 6000 which once roamed that province.

REPRODUCTION:
Female brown bears reach sexual maturity at four-and-a-half to seven years of age. Males may become sexually mature at a similar age but are probably not large enough to be able to enter the breeding population until they are eight to ten years old. Brown bears mate in early summer, embryo (blastocyst) does not implant and start to grow until the mother enters the den in late fall. Mating takes place from early May to the middle of July but implantation does not occur until about October or November.

The young are born from about January to March while the mother is sleeping. The litter size ranges from one to four, but two is most common. They usually weigh about one pound at birth. the cubs are born blind and helpless, but by drinking their mother's milk they gain weight quickly. Cubs remain with their mothers for at least 2 to 3 years old, so the most frequently a female can breed is every three years. In some areas, such as near the Arctic coast, the breeding interval is considerably longer. Longevity in the wild is 20 to 25 years. Usually by late April or early May the cubs are ready to leave the den and explore with their mothers. Because of predatory males and other threats, mother bears are renowned for their ferocity when defending their young.

COMMUNITY:
Adult brown bears live alone except for females with cubs. Sub adult siblings travel together, large groups gather where food is abundant. Respect other bears "personal space". Adult males are the most dominant individuals, in group situations. they communicate through complex forms of body language.

SOCIAL SYSTEM:
Under most circumstances, brown bears live as lone individuals, except for females accompanied by their cubs. During the breeding season, a male may attend a female for up to two weeks for mating. Brown bears are distributed in overlapping home ranges and male home ranges are larger than those occupied by females. Despite their propensity for a solitary existence, brown bears congregate at high densities where food is abundant, such as at salmon streams or garbage dumps. In such circumstances, adult males are the most dominant individuals.

DIET:
Brown bears are omnivorous, opportunistic feeders, which means they eat both plants and animals. Their diet varies according to the season and habitat but includes everything from grasses, sledges, bulbs, roots, berries, and nuts to insects, fish and mammals including rodents, deer, elk, carrion and moose. Grizzlies will eat on carcasses as well as kill living animals. In some areas they will predate on moose, caribou, and elk form part of the diet.

BEHAVIOUR:
Daily Activity:
Most brown bears are active during dusk and dawn, although they can be active any time of the day, especially in late summer and fall. They tend to rest in day beds that they make in dense vegetation within the forest in order to escape the heat. Brown bears are powerful diggers. They use their claws to find roots, bulbs and rodents, as well as to make winter dens on steep mountain slopes.

HIBERNATION:
Brown bears are not true hibernators, but they slow down their metabolism and sleep through most of the winter in order to save energy when there is little food available outside for them to eat. These bears usually sleep in remote locations where they den. They are able to sleep through the winter by living on reserves of fat stored on their bodies during the summer and fall.

PEOPLE AND BROWN BEARS:
People have been fearful of brown bears ever since people began exploring bear habitat. Many brown bears have been killed because of this fear, while others have been killed for food, fur and bile trades . Today most brown bears only survive in protected areas. Because grizzlies are considered a threatened species under the Endangered Species Act, wildlife managers are trying to actively protect grizzly populations in the lower 48 states and their critical habitat. (A threatened species is one that is likely to become endangered if protection measures are not implemented). Hopefully, with careful management and a solid recovery plan, grizzly populations will increase and will no longer need Endangered Species Act protection.

Also, their habitat needs much better protection from human encroachment. People sometimes leave garbage and food in places where bears can easily find it. Once corrupted with food scraps, or even food containers or wrappers, bears can quickly develop a taste for garbage and then go looking for it. When a bear is habituated to garbage they get into trouble because they scare and anger people with the damage they cause to property and the danger they represent. When a bear becomes a problem it may be relocated, but it often continues to cause problems and is killed. Grizzlies are an important top level carnivore in the ecosystem and they are animals that can teach us a lot about living responsibly with wildlife and respecting the wilderness and habitat where they make their homes.