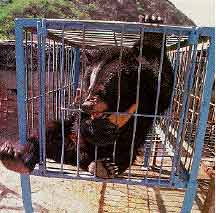 CHARACTERISTICS:
This medium-sized, jet black-colored bear has a lightish brown/tan muzzle and ears which appear large in proportion to the rest of its head, especially when compared with other species of bears. There is a distinct white patch on the chest, which is sometimes in the shape of a V, and white on the chin. A brown color phase also occurs. Hair around neck and shoulders is thick and long with a mane-like appearance. Bears found in higher altitudes of the northern regions have a thicker coat. Ears are large and set far apart on their large, round heads. Short, strong claws used for climbing trees, opening termite mounds and peeling bark to eat.

HABITAT:
Asiatic black bears live predominantly in forested areas, especially in hills and mountainous areas from the base of coastal foothills to approximately 13,000 feet. Distributed through Southern Asia, North East China, Japan and Far Eastern Russia. During the summer, they most often are found at higher elevations. In summer, they have been reported at altitudes over 3,000 meters (9,900 feet), descending to lower elevations during winter. Apparently, they den for winter sleep in the northern parts of their range. It has been suggested that in the southern limits of their range, where it is quite hot, they do not undergo winter sleep, but this has not been confirmed. They stay at or descend to lower elevations during winter reportedly to be mainly nocturnal in northern parts of their range they den for winter sleep Winter sleep in the southern limits of their range have not been confirmed Make temporary "nests" in the tree tops to feed in. They spend most of their time in trees, avoiding predators and humans.

DISTRIBUTION:
Asiatic black bears are found over a wide area of southern Asia. They occur along the mountains from Iran, southern Russia, Afghanistan, through Pakistan and northern India, Nepal, Sikkim, Himalayas, South to Bangladesh, Laos, Bhutan, into Burma, northeastern China, and north through the Tibetan Plateau. Populations may also be found on Taiwan, on the Japanese Islands of Honshu and Shikoku. This population is called the Japanese black bear.

REPRODUCTION:
There is little detailed information on reproduction in Asiatic black bears, but there seem to be differences between populations in southwestern and southeastern Asia. Sexual maturity of females is thought to occur at three to four years of age. Usually mate in the spring or autumn, depending on location. In Russia, mating is reported to occur in June and July, with births occurring between December and March. In Pakistan, mating has been reported to occur in October, with young being born in February.

Like North American black bears, Asiatic black bears delay implantation of the embryo until conditions are right for giving birth, usually two cubs in winter or early spring. At birth, cubs weigh only about 1/2 pound each. At one month, cubs begin to follow their mother as she finds food. Usually cubs remain with the mother for two years to three years.

Female Asiatic black bears mature at three to four years of age. Mating practices and birthing seasons are different between populations. Cubs are weaned at less than six months, but may stay with their mothers for two to three years. Females have sometimes been reported with cubs of different ages.

COMMUNITY:
Little is known of the social organization in the wild.

SOCIAL SYSTEM:
In Russia, the home range is reported to be 10 to 20 square kilometers (4 to 8 square miles). Little information is available on social organization. The bears are reported to be mainly nocturnal, sleeping in trees or caves during the day.

DIET:
Asiatic black bears have been reported to feed on a wide range of foods, including fruits, bees' nests, insects, invertebrates, small vertebrates, and carrion. They occasionally kill domestic livestock, but the degree to which they prey on wild hoofed mammals in unknown. In fall they frequently make crude leafy feeding platforms in nut-bearing trees. Omnivorous; eat termites, beetle larvae, honey, fruits, berries, and carrion. Sometimes prey on goats, sheep, and cattle. Peel bark from trees to eat the exposed sapwood (often results in the death of valuable timber trees). These medium-sized bears are highly adaptable forest animals.

BEHAVIOUR:
Daily Activity:
Nocturnal, often sleeping all day in a cave or hollow tree, they come out at dusk to look for food. Generally sit in the high fork of a tree to access their favorite foods. Where they sit is called a "bear's nest." The "bears' nests" look much like birds' nests and can be found over 60 feet (18 m) high in cherry, beech, oak, or dogwood trees.

HIBERNATION:
Some Asian black bears hibernate while others remain active all year, depending on habitat and how cold it gets. In colder northern regions, most den from November to March in hollow logs. Bears in southern parts of their range may sleep for short periods of time or descend to a lower elevation to find food.

PEOPLE AND BLACK BEARS:
Feared by humans because they have been known to kill livestock and attack people. Legal protection has been difficult to establish (some governments encourage trapping of bears). Chinese use bear parts (meat, gall bladders and bones) for Traditional Chinese Medicine (TCM). Bears may also be captured as cubs and trained to ride bicycles and dance. Currently, serious conservation efforts are unlikely because local people are so afraid of bears. If the present rate of hunting continues, these bears may become extinct.