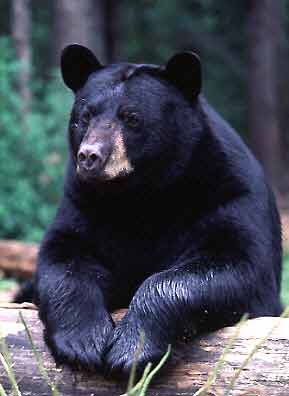 CHARACTERISTICS:
This medium-sized bear is usually black with a brown muzzle, lacks a shoulder hump, and often has a white patch on the chest. Variable - range from black or brown to even bluish (pale blue) or white. Although black is the predominant color, chocolate and cinnamon brown color phases are also common, which often results in people confusing them with brown bears. Black bears with white and pale-blue coats (known respectively as Kermode and glacier bears) also occur in small numbers. Kermode bears are found along the north-central coast of British Columbia, and the Yukon Territory, Canada. Relatively long muzzle, small eyes, and large nostrils and large prominent ears. When standing on all fours, rump is higher than front shoulders. Often have dark colored, sharp, curved claws that do not always show in their tracks. Claws are usually less than 2 inches in length. Black bears have strong, highly curved claws and the profile of the face is convex when compared with the more concave profile of a brown bear. Habitat can dictate coat color. Females can give birth to cubs that are different colors.

They keep warm and dry because of a layer of soft thick fur next to the skin called under-fur. Guard fur on top of the under fur is much thicker and protects the bears from moisture, insect bites and stings; also acts as camouflage. Because of the confusion in colors, it is best to call brown black bears exactly that. The pure white phase of the black bear along the British Columbia coast is also called "the Spirit Bear."

Black bears vary considerably in size, depending on the quality of the food available. In eastern states, animals grow to larger sizes because of access to fruit trees like beechnut and oak. Males may be from about 20 to 60 percent larger than females. At birth, cubs weigh 225 to 330 grams (7 to 11 ounces). Birth weight averages 12 ounces. Longevity in the wild is 20 to 25 years

HABITAT:
The North American black bear is the most abundant bear in the world. Black bears are normally found only in forested areas, but within such habitat they are highly adaptable as long as they have good supply of food, water, shelter, and space to live. Generally prefer forests with an under-story that provides both food and protection. They may live in low elevation swamps or high mountain meadows. They live in both arid and moist forests, from sea level to over 2,000 meters (6,560 feet). Historically, black bears are thought to have stayed away from open habitat because of the risk of predation by brown bears. Black bears have become established in the tundra of northern Labrador, a region where there are no brown bears.

Each year humans move farther into black bear habitat, forcing bears to learn how to live in a new setting where natural food sources, dens, and water are harder to access.

Currently black bears exist in 95% of their former range and they are even returning to forested areas in or near major cities. With a current estimated total number of 630,000-800,000, the species is listed in Appendix II of CITES.

DISTRIBUTION:
About 400,000 black bears live across North America. Black bears are widely distributed throughout the forested areas of North America although they have been totally driven out from some of their original range. They are presently found in northern Mexico to the edge of the tree line in sub-arctic Canada. In the United States, black bears live in 32 states from the southeast to the Appalachian Mountains, and all the provinces and territories of Canada except Prince Edward Island. Also found along the north-central coast of British Columbia and the Yukon Territory, the lower Mississippi valley, the upper Midwest, throughout the Rocky Mountains, the southwest and the West Coast.

Embryo does not start to grow until the female enters her den in the fall. Pregnancy lasts about 220 days, and the cubs are born in a maternity den in January and February. Cubs weigh about 1/2 pound at birth. Litter size ranges from one to five, but two is the average. By April or May, cubs are ready to leave their winter den. Females usually build a day bed at the base of a tree, so that they are hidden. At several months of age, cubs play together, climb trees and begin to feed themselves. They stay close to their mother. Cubs may be weaned at six to eight months, but they remain with their mothers for a year and a half. Consequently, the most often that female black bears can mate, unless they lose their cubs prematurely, is every two years. Longevity in the wild is 20 to 25 years.

COMMUNITY:
Solitary except for females with cubs Groups will feed in close proximity to each other if food is abundant.

SOCIAL SYSTEM:
Except for females with cubs, black bears spend most of their time alone. During the breeding season, a male and female may remain together for several days at a time and groups of bears may feed in close proximity to each other if food is abundant, such as in berry patches or at dumps. Female home ranges are 3 to 40 square kilometers (1 to 15 square miles). While the home ranges of individual bears are usually exclusive from those of other bears of the same sex, male ho me ranges are larger and may overlap those of several females. A young adult female is often allowed to establish her territory within that of her mother, while sub adult males must disperse.

DIET:
Black bears are omnivorous and feed on a wide range of foods, depending on what is available. Insects (particularly ants), salmon nuts, fish, carrion, berries, acorns, grasses, roots, forbs, and other vegetation form the bulk of their diet in most areas. Black bears can also be efficient predators of deer fawns, elk calves and moose calves. In some areas of coastal British Columbia and Alaska they also feed on spawning salmon. When meat is difficult to find, diet will consist primarily of plant matter. When food is scarce, may raid farms, garbage cans or dumps, or beehives, when people are careless.

BEHAVIOUR:
Daily Activity:
Usually active in the morning and later in the evening. Often rest in day beds made in dense vegetation within secluded forest areas to escape summer heat. Very agile and can move quickly, up to 40 miles per hour, for short distances. Excellent tree climbers, black bears can climb trees to escape predators and other bears and to feed on fruit and nuts.

HIBERNATION:
Most sleep during cold months to conserve energy when food is scarce. Not true hibernators because they sometimes wake up during the winter and may leave the den to roam. Dens are often constructed on an insulated spot on the side of a hill. May den in caves or large hollowed-out trees. During summer and early fall, black bears eat all they can and store it in their body as fat. This fat will provide them with nutrition needed to get them through the long winter (while "hibernating" in the den).

PEOPLE AND NORTH AMERICAN BLACK BEARS:
They are not an aggressive species. Black bears can be found living in forest habitats not far from cities like Washington D.C., Minneapolis, Seattle, and even New York City. Generally they are shy and try to avoid contact with humans. They can easily become habituated to eating human food, and may eventually stop foraging in the forest and become a nuisance to humans. Relocating a problem bear is difficult since they return to their own area. Often, the only solution is to destroy the bear. Each fall, people are allowed to hunt black bears in areas where they are abundant. Limited hunting is encouraged in order to control the population of bears in certain areas. May be poached to sell parts such as bear paws or the gall bladder to satisfy a large Traditional Chinese Medicine market. Black bear habitat is shrinking as humans develop houses and resorts. Educating people about co-existing with bears and other wildlife is critical for the long-term persistence of wild bear populations.